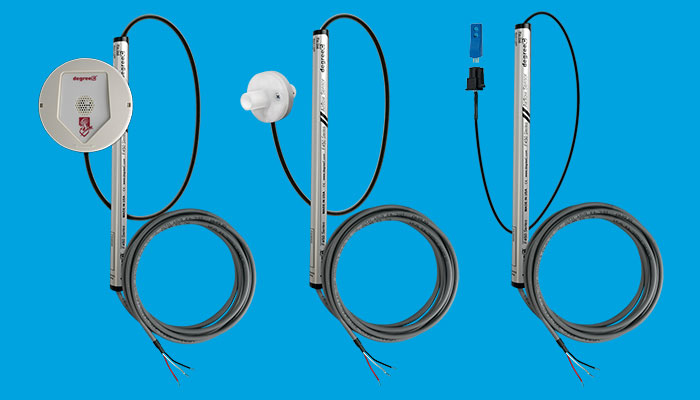 Specialty sensors use dual-sensing elements to measure air velocity and air temperature simultaneously. The sensor element is built remotely from the sensor electronics, which is advantageous for those systems involving high EMI sensitivity or extreme temperatures, or where the sensing area is limited. Application specific sensors are configured to order with choices for supply voltage, sensor head style, velocity range, and analog and digital communication outputs.

Sidewall sensors act as flow-through devices and are well suited for applications where clean, ambient air can be drawn in, rather than contaminated exhaust air, to measure airflow. (Sidewall is leftmost sensor in image above.)

Inline sensors are designed to retrofit failed legacy products, or those which are no longer accurate enough for new standards. They are typically mounted inside a cabinet plenum area to increase the tamper-resistance of the sensor element. Inline sensors can be quickly installed and connected by splicing into the ½” flow tubing being used by an existing airflow monitor. Tubing is included with inline sensors. (Inline is middle sensor in image above.)

Need help finding the right sensor for your application?

Our friendly and knowledgeable sales team is standing by to answer your questions.
We use cookies on our website to give you the most relevant experience by remembering your preferences and repeat visits. By clicking “Accept”, you consent to the use of ALL the cookies.
Privacy PolicyCookie SettingACCEPT
Manage consent

This website uses cookies to improve your experience while you navigate through the website. Out of these, the cookies that are categorized as necessary are stored on your browser as they are essential for the working of basic functionalities of the website. We also use third-party cookies that help us analyze and understand how you use this website. These cookies will be stored in your browser only with your consent. You also have the option to opt-out of these cookies. But opting out of some of these cookies may affect your browsing experience.
Necessary Always Enabled

Any cookies that may not be particularly necessary for the website to function and is used specifically to collect user personal data via analytics, ads, other embedded contents are termed as non-necessary cookies. It is mandatory to procure user consent prior to running these cookies on your website.